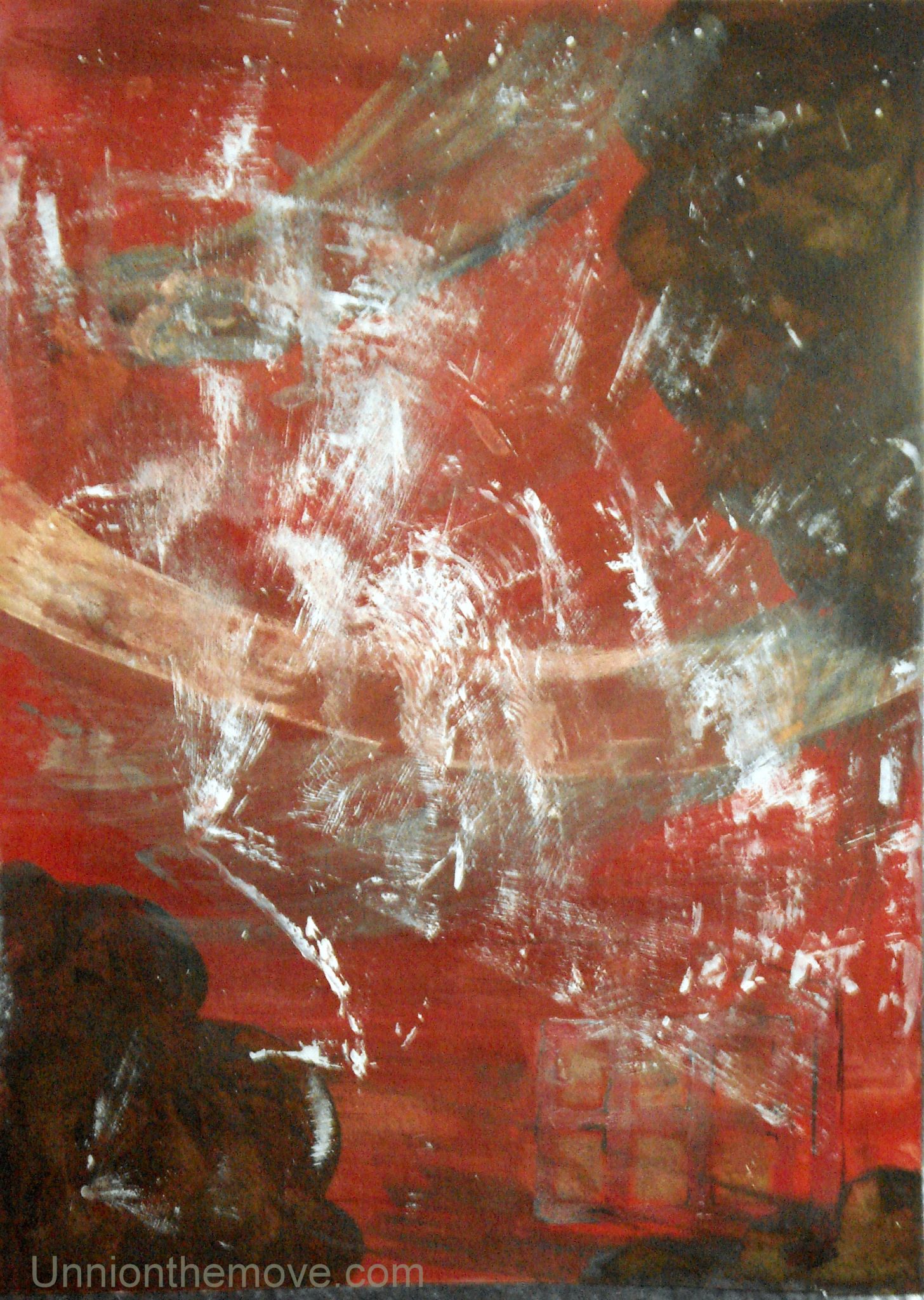 Adam was lying in his bed , with the soft quilt all around him. The air conditioner was running and the cold air blown out from it had created a small cozy world around Adam where he was happy and comfortable. He switched on the screen and started channel surfing.

Everything was happening around him now, he was out there in the world seeing and experiencing everything as he had always known it , with out going out or getting dirty.

Adam was nearly half an hour into the channel surfing when he came across something he liked, but then suddenly out of no where , the front door bell rang. It was years since someone had used it. It was there just because the builder put it there when the condo was constructed many years back. Adam was shocked to hear that sound. Who would it be? Its been more than a year since someone came to his house. It either had to be another human being or it could be one of the enforcer robots, , but then it was trouble.

He slowly got up from the bed, and was searching for something to wear. He had all his clothes in the small locker , by the hallway. He went through it and found a robe. He wore it and by that time the door bell had rung twice more. Who ever was it at the front door seemed to be in a hurry, Adam thought. He reached the front door and switched on the door screen. It was Emily !!

Emily hadn’t told Adam anything when they met yesterday on screen and now she is literally here, at his front door. Being a girlfriend is one thing but coming to the house was too much for Adam. You could always meet on the screen and do what ever she wanted but this was invading privacy. He was thinking whether to open the door for her, but looking at her and at the distress that she was in, he decided to open the door. He took out the manual from the shelf rack and punched in the code. The door opened and Emily came in , staring at Adam.

She came in, looked around and sat down on the floor. Adam felt as though she was coming back to her senses. Adam stood at the other end of the room looking , as the presence of her in the same house made Adam uncomfortable.

“Can I have some water?”, Emily asked. Adam felt that as a shocker, “You come into my house and now you want water and drink from the same glass that I use”, Adam thought.

He went to the water dispenser, took a glass, filled it with water and kept it on the small table in the center of the room. Emily came forward , took the glass and drank the whole thing in one go.

“ The guy, who was preaching to us about something called history. He said that we were unhealthy and that we had diseases before. He had all these weird prophesies remember? “

“Ya, that weirdo , he had some funny theories. Don’t remember the whole conversation though , will have to go through the logs, but tell me, what about him? ” Adam asked

“ He is missing from this sector “, Emily said.

“Oh , Enforcers will be all around his place by now. But, for that why are you here ? , you could have just alerted me ?” Adam asked

Emily retorted, “ No, No , there is a reason that I am here , He was a pretty good friend of mine and unfortunately he had sent me something before he went missing and I am afraid that the enforcers will get to me for that”

Adam asked,” What? What did he sent you? And why did you come here , now I am also in trouble”.

“ He sent me a portion of what he called as “The Cure” and also he send me this..” , by saying this Emily took out a small bottle and another small pack , which looked like a bundle of sheets of some organic material with letters printed on it.

“I don’t know but it has letters on it as we have on the screens but these doesn’t move. These have some pictures also , some of them are really weird and I don’t understand them” , Emily replied.

Out of curiosity Adam moved closer to Emily to see, but the presence of another human body next to him made him really uncomfortable. He asked her to keep it on the small table at the center of the room.

Adam took it in his hand and started to feel the material,

“ This definitely looks organic, I am not sure whether these would go thorough even our washroom test cycle.. where did he get this from? , what is shown on it?, oh, its just text , I believe. Look here there are pictures too”

Emily said, “I read through the whole thing, what is said in it is really interesting. There!! Check there”, Emily asked Adam who was going through the different sheets, “there are pictures of some small humans in that , it seems they are what we looked like before. Its called growing up. Then they tell about, life being better in the past , we all had our own things to do and we do it and then we stop living , and then we come again to do something else and so forth. It was not like now,it was very short and small and they measured this life using an instrument that is inset in that photo there. It is called a clock”

Adam said, “ Oh my !! Check this out , 5 people sitting together in the same table and eating, they must be out of their minds ”.

By telling that , Adam showed Emily the picture on one of the sheet.

They looked at each other in surprise. By this time they had moved close to each other.

Emily told Adam, “ It is said in this that humans used to live together as a group. They generated food together and ate together” . How can this be?”

Adam said, “ Sitting next to you right now itself is me making me go crazy as I am afraid that I will get some of your germs, as you came from outside and imagine all these people living together. It would have been a paradise for these germ. I don’t know why , as we now live alone, didn’t they need privacy? How can they share space with others? They would have known about it right?”

Emily , turns to a particular sheet and tells Adam, ” Talking about paradise , look here , they talk about this paradise here , see . There you see, that is water flowing through the floor.This is what it used to be it seems , humans used to drink the water from this flowing water and see , these green things on brown pillars were the O2 generators of the past”.

Adam is surprised and asked Emily, “ Where did Twain get this from? What is this thing anyway ? Are these the truth or just stories. I have seen so many stories on the screen but none like this , this is quite strange”

“ It just gets weirder , my dear “, Emily says “ it mentions here that we are stuck in a state where we are not free to roam to other worlds and experience other things , but this thing in the bottle that Twain gave me I believe, is a cure for our condition now. It says by taking this we will go into another level of existence, something that is greater and more amazing than what we have now”

Adam asks, “ So is that why he disappeared? , he took that and he escaped to another existence is it.?”.

“ May be, I don’t know , but there at this last sheet it says that this is not for the faint of heart. Achieving this will be difficult for us, we will have to go through many hardships to get there, so I don’t think drinking this will be easy” Emily said.

“Hm , now that you have said it , I am getting second thoughts . Shall we try it ?” Adam asked.

“ But we don’t want to end up like Twain do we?” Emily replied.

“ But after years of staying here , I believe , It will be better to experience some thing different rather than going out into the open” said Adam.

“ OK , but I don’t know how exactly this works , there is nothing said about the cure in these” and as Emily was saying this she took out the small bottle and gave it to Adam.

“ But we will take this together, shall we ? Lets see what will happen, where ever I end up it will be better to have you also as company” Adam said.

Emily nodded her head as Adam poured one portion of it into the glass that Emily had the water in.

“ Shall we ? OK I will count to 3 and then we will drink together “ proposed Adam.

“ Sure, go ahead” said Emily, as Adam started the count and on three both of them took the cure together.

As they finished drinking , Adam said, “That is really sour”

Emily too shared the same feeling about the cure, and as they were waiting for something to happen , Emily took out of the sheets and she said,” Aah, and yes I forgot, this new level of existence is called Freedom and it starts with a phase which is pretty painful”.

Adam asked ,” OK , but nothing is happening, Are you feeling any different?”

In time they both started to feel some pain from inside their body , and as they were preparing to enter this new level , Emily asked Adam, “Shall I hold your hand”.

Adam nodded and said, “Yes , you may” and Emily smiled.

They were entering this new level of existence called freedom. They embraced the first step of pain completely and as they closed their eyes , Emily remembered reading in one the sheets , that the first painful step in achieving freedom was called death.

But she was incapable of muttering it out to Adam as she was already free of everything that she had.