Why you should start a blog if you are an Indian.

When you start blogging, you always wonder about the audience that you are targeting.  There are numerous blogs which gives you details about clearly identifying you target group.  But then there is always that question, “there are millions of blogs out there, so should I blog?”
The pro bloggers world wide have clearly identified their target groups using age demographics, interests  etc. Some of the examples are  technology related blogs for males age groups 18-35, self help and productivity blog for both sexes in the age group of 25 to 45, family and children upbringing related blogs try to identify groups  of the same age group, but who are married and have children. The most common blogs recently have been about travel , because of the increasing number of international travellers who are baby boomers or who have embraced the “hippie and independent traveler” idea. Also another popular blog type is the independent woman travelers which is also gaining quiet a lot of interest in the recent years.
While doing the research on the demographics that I should be targeting, which I did have some trouble figuring out. I settled on the idea of men and women aged 18 to 45 who are a bit adventures and is in a mood to travel. I believed that, it wouldn’t work as expected because, that is a pretty big group and there is already so many interesting blogs which are specifically targeted towards that group. Thats when I realized, I should go back to my roots.  India!!

India and its big numbers

The numbers when you talk about India are inconceivable to the western world. In the part of the world where I live and  work, any number I throw at them about India seem to surprise them. Let me share an experience of a friend of mine, which he came across, when he went to a Finnish language class. As part of the ice-breaking session, the teacher was asking around the class where each one is from and what is the language they speak. When it was the turn of my friend, who also hails from Kerala, he replied politely. The teacher followed up with a question of what language you speak and he answered,  “Malayalam”.  The teacher had trouble pronouncing it  as any one who is experiencing a new language has. She then started off introducing Finnish language and the number of people who speak that language. It might have been a misconception on the teachers part that, as there are hundreds of languages in India, the language which definitely was not Hindi, would only be used by a limited number of people, hence she asked him, “so  how many people speak your language?”. My friend consulted google and happily replied 36 Million. The teacher was flabbergasted first, but then she realized when it comes to India, the numbers are always very very  big.  To note that , Finnish is spoken by just over 5 Million people.
Another one of my personal favorites , when it comes to big numbers is about the number of people who use Indian railways every day. Indian Railways daily transport more people than the total population of Finland, Sweden and Norway put together.
Facts here : http://www.indianrailways.gov.in/railwayboard/uploads/directorate/stat_econ/IRSP_2016-17/Facts_Figure/Fact_Figures%20English%202016-17.pdf
https://www.business-standard.com/article/beyond-business/18-interesting-facts-about-india-railways-business-standard-news-115021600404_1.html
Now that we have the numbers right,  let me get to my point which I want to make. A blog is successful, if you have thousands of visitors per day, reading , sharing and referring your blog content.  That number is definitely possible given the numbers in India. We have to realize the number of young and literate Indians are at an all time high, which is just awesome. Just taking into account the number of the people who speak the language Malayalam which was 36 million, getting a 1 percent readership in that community would be enough to skyrocket  your blog from mediocre to established. Also, being an Indian, we all will mostly be well versed in our local language. Added together with the good understanding of English, gives the blogger an option to blog in his mother tongue as well as English.

Some stats here of my state

Here I would like to point out the number of literates as well as the child population which is coming up. Well, this is one state and mind you, Kerala doesn’t make the top 10 in the Indian states by population.
The  total population of the most populous state in India, Utter Pradesh is  just shy of 200 Million and the 69 percent of them are literates.
Now let me move on to the big numbers.  Check out India at a glance from the Indian census of 2011 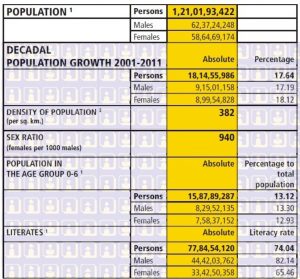 Big numbers when it comes to India

Facts here: http://censusindia.gov.in/2011-prov-results/indiaatglance.html
Thats a whopping 778 million people in India open to read your blogs. Well, its not exactly like that ,in practice,  I know. Even if we get 1 percent viewership for the blog, your blog would have been read by over 7 Million people !!!! Now that’s a number to reckon with.

I was pleasantly surprised to see a trend which I see in Finland in India as well. This time around when I was using a public transport in my city, which is a Tier 2 or Tier 3 city in India(Cochin, Kerala),  I could see many people in the bus using headphones and browsing through Facebook, Youtube and web content while commuting. As I mentioned earlier as most of the literate young generation of Indians are using mobile devices, so its easier to interact with them  if you write short content  and focus on multimedia content( Info graphics, videos etc). Here again another whopping number; by 2019 , there would be 813 Million mobile phone users in India !!
Fact here: https://www.statista.com/statistics/274658/forecast-of-mobile-phone-users-in-india/

So wake up, plan and start a blog if you are an Indian.

Most of the numbers which I am referring  are from Indian census on 2011. http://www.censusindia.gov.in/2011-prov-results/PPT_2.html
Footnote: The numbers are big when considering China as well, but as I am blogging about India and for Indians who are interested in blogging, the big Chinese numbers are of less relevance here.
0

Cochin: Queen of the Arabian sea